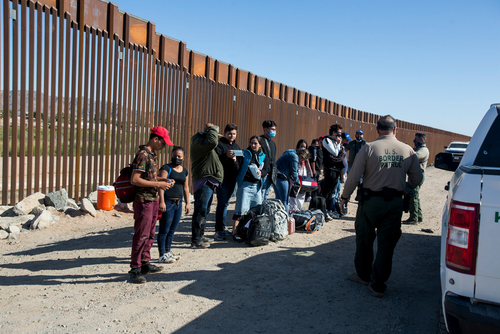 The House Republicans, who will soon take control of the chamber, have already clarified that illegal immigration and border security will be among the first items on their agenda once they assume power early in 2023.

Despite the Senate remaining in Democratic hands, Republican victories in the most recent midterm elections have given the GOP control of the House. Republicans have pointed out that the border problem will be a priority within days of taking the House.

The GOP Leader Kevin McCarthy led a group to the southern border this week and called for Alejandro Mayorkas, the secretary of homeland security, to resign or face a potential impeachment investigation next year. This was a crucial moment in the GOP’s week.

McCarthy stated Mayorkas could not and must not remain in that position. House Republicans will look into every directive, every action, and every omission to see if we can launch an impeachment investigation if Secretary Mayorkas does not quit, he said.

McCarthy claimed to have called with Reps. Jim Jordan and James Comer, the Republican leaders of the Judiciary and Oversight Committees, reassuring them of his full support for their efforts to look into the “collapse” of the border.

More than 1.7 million migrant exchanges occurred in FY 2021, and more than 2.3 million occurred in FY 2022 during the approximate two-year border crisis that has affected the United States. More than 230,000 people crossed the border in October alone, indicating that the wave of migrants is likely to see a continuous flow.

A federal judge recently ruled that the administration must gradually stop using the ‘Title 42 public health order’, which has been applied to most border crossings since March 2020 and has resulted in the expulsion of most migrants. As more migrants are released into the United States, there are fears that the surge may grow larger and cause more turmoil.

Republicans have long criticized the Biden administration for their methods of handling the problem, claiming that officials have exacerbated it by rolling back Trump-era regulations and limiting interior enforcement. The Biden administration has urged Congress to amend U.S. immigration laws, saying the situation is hemispheric.

In July, Republicans announced various border security policy measures they promised to enact if they won the House. The Trump administration’s policies include finishing the border wall and expanding Title 42, while updating technology and reforming the asylum process.

John Katko, the ranking member of the House Homeland Security Committee, said in July that he thinks they will be extremely forceful, and he believes the administration will have some choices to make. Do they want to work with Republicans if the Republicans are in the majority and start doing some of the things that Republicans want, or do they want to spin their wheels for two years and get nothing done?

McCarthy said he plans to hold hearings at the border so Democrats can see the crisis firsthand.

Separately, Judiciary Committee Ranking Member Jim Jordan sent a letter with other senators requesting for “unfettered cooperation” from Mayorkas and other DHS officials in testifying next year.