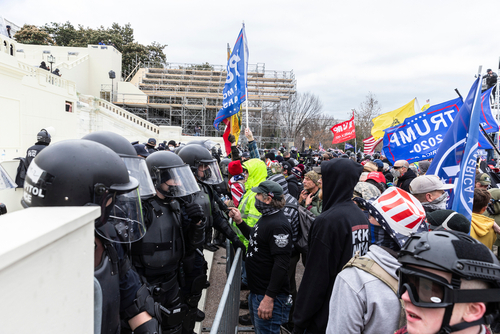 Biden’s Department of Justice deems the suicide of a Capitol Police officer on January 6 as a death “in the line of duty.” During the Biden  Administration, the Department of Justice recognized the suicide of Capitol Police officer  Howard Liebengood following the January 6, 2021, Capitol intrusion as a death “in the course of duty.”

The family of Capitol Police Officer Howard Liebengood said that he committed suicide on January 9, 2021, just days after the commotion at the nation’s capital.  According to a statement sent to CNN by Liebengood’s family, the Justice Department made the “line of duty” finding on Monday, nearly two years after the incident.

By re-classifying the suicide as a line-of-duty death, it opens up benefits for Mr. Liebengood’s family.  Although benefits vary by state, it will ultimately provide more resources and money for the officer’s family.  Mr. Liebengood’s surviving family members have sought the decision as a strategy to obtain service-connected benefits following Liebengood’s unexpected death.

According to CNN, the Liebengood family said they were just advised that the Department of Justice formally concluded that their dear family member Howie Liebengood died in the line of duty under the Public Safety Officers’ Benefits (PSOB) program.

The family stated that they appreciate this decision’s significance, healing, and relief.  In a letter to Virginia Democratic Representative Jennifer Wexton following her husband’s death, Serena Liebengood said that difficult work circumstances following the January 6 intrusion may have contributed to his suicide.

After aiding with Capitol riot control on January 6, USCP scheduled Howie for long shifts in the following days, she wrote, according to WJLA-TV in Washington.  He spent only a handful of hours at home over the course of four days, Liebengood added.

From January 6 to January 9, despite being sleep-deprived, he stayed on duty nearly around the clock as commanded, she wrote.

On the evening of the ninth, he committed suicide at their home.

Depending on who is counted, the exact number of casualties resulting from the January 6 incident might vary.  According to D.C.’s chief medical examiner, Capitol Police Officer Brian Sicknick died from two strokes the day after the Capitol invasion.  However, many others believed he died from injuries received during the January 6 riots.

Ashli Babbit, an unarmed Air Force veteran who was shot by a Capitol Police officer, was the only person directly killed during the Capitol invasion.  The agency ruled that the shooting of Babbit was legal.