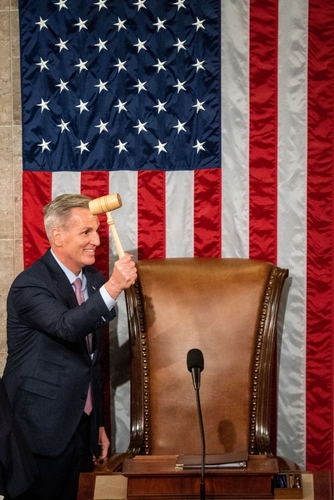 Byron Donalds garnered a maximum of 20 votes for House speaker, including his own, during discussions to find a route forward to unite the GOP caucus after his name had been put up, despite initially voting with the majority of the caucus in the first rounds.

Trump told Fox News anchor Maria Bartiromo that Donalds was appointed to a committee for supporting McCarthy and discussed some of the significant agreements reached, including portions of the regulations slated to be adopted on Monday.

As the “Sunday Morning Futures” segment concluded, Bartiromo addressed the congressman directly by stating that everybody received something and asking what he got.

Donalds said that he would join the Republican Steering Committee as McCarthy’s designee. He further stated that part of it would ensure the whole conference, the whole ideological spectrum, is represented through all committees. The committee’s job is to determine which caucus members ought to be selected and which other House committees to forward the goals.

Donalds also said that this is crucial because of what he observed in his first two years in Washington. He further stated that it was not Kevin’s fault, that this is the nature and culture of Washington, D.C., adding that the members are pretty divided. Unless they actively seek it out, there aren’t many opportunities for them to interact.

To do the right thing by the American people via a deliberate and open process, and many talks are going on, he believes that the Republican conference would benefit from having more voices on more committees.

After 15 rounds of voting, Donalds stated he was simply thrilled that it was all over with, that they got something revolutionary and sound for the American people and that what happened would truly assist the House of Representatives to become ‘The People’s House.’

Donalds said he was first lenient with Kevin. Unfortunately, he soon realized that they were making no progress. As a result, he wondered, “OK, how long is this going to go?” The legislator from Florida said, “How is this going to play out?” So, in the end, it was all about making sure that they could bring folks to the table to build a framework everyone in congress could get behind, as one participant put it.

Similarly, Ohio Republican Representative Jim Jordan told Fox News’s Shannon Bream, “Sometimes democracy’s messy, but I would say that’s exactly how the Founders intended it.” Jordan was also a candidate for the nomination.

They demanded an open discussion in which everyone could have their say before making a final decision. Kevin McCarthy retains his position as speaker of the House, with or without a majority vote. Overtime and extra innings are nothing new for me in sports, and that’s the way things are, Jordan chimed in.

Both representatives emphasized the value of single-subject legislation over pork-filled omnibus packages and the significance of the 72-hour review period that would be enforced under McCarthy.

Trump also commented on the upcoming probes, saying that the evidence should stand for itself. They want the American people to be aware of President Joe Biden’s suspected participation in his son Hunter Biden’s international business transactions. And if it turns out that major crimes and misdemeanors have been committed, then they will take the next logical step.