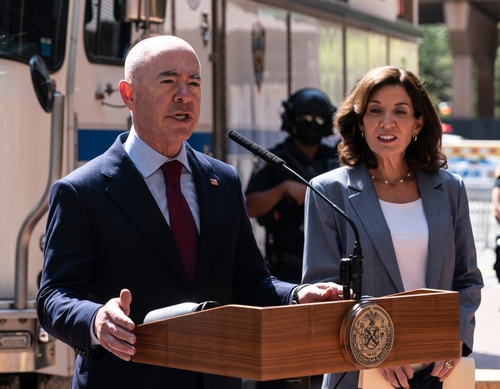 Rep. Pat Fallon (R-TX) followed through on his vow to submit articles of impeachment against Homeland Security Secretary Alejandro Mayorkas on the first working day of the 118th Congress by doing so. The articles of impeachment against Mayorkas were located in House Resolution 8 for the deeds of “high crimes and misdemeanors.” The resolution was referred to Judiciary Committee on Monday.

The week before the new Congress was inaugurated, Fallon threatened to introduce articles of impeachment against Mayorkas. The new GOP majority in the House is working hard to finish these and other initiatives to counter the Biden administration’s policies on the southern border and the immigration crisis.

Secretary Mayorkas’ tactics have “undermined” law enforcement efforts at the southern border, Fallon said in a statement last week. Secretary Mayorkas has repeatedly demonstrated that he is unsuitable to head the Department of Homeland Security, from lying to Congress about keeping operational control of the border to the infamous ‘whip-gate’ defamation against border patrol personnel, Fallon said.

The immigration system, the morale of border patrol agents, and the safety of the United States are all in jeopardy because of his deliberate acts. He’s broken the law, and now he needs to leave, Fallon added.

The content of the impeachment articles filed against Mayorkas is still unavailable; however, Fox News reported last week that Fallon’s first article argues that Mayorkas failed to faithfully implement the “Secure the Fence Act of 2006.”

To maintain operational authority over the entire international land and marine boundaries of the United States, as the legislation puts it, the secretary of Homeland Security must be appointed.

The second piece states that Mayorkas willfully delivered false, misleading, and perjuring testimony to Congress in violation of his constitutional oath. The article cites Mayorkas’ statements from congressional hearings on April 26 and November 15 to support this argument that the border is not insecure.

The third count accuses, Mayorkas of “publicly and falsely” slandering border officials who were erroneously accused of beating Haitian migrants in Del Rio, Texas, in 2021 but were ultimately acquitted.

The Office of Personal Responsibility for the U.S. Customs and Border Protection found no indication that Border Patrol agents were involved in this event. And no agent deliberately or otherwise hit any migrant with their reins. Secretary Mayorkas’ defamatory remarks against Border Patrol officers and Texas Department of Public Safety troopers involved in this incident further lowered morale among agents.

Rep. Kevin McCarthy (R-CA), the new speaker of the House, visited El Paso in late November and called for Mayorkas to resign over his handling of the border crisis, threatening an impeachment inquiry once Republicans took official control of the House.

McCarthy stated that the House Republicans would scrutinize every order, action, and failure by Mayorkas to willingly resign would result in the Republicans starting the impeachment proceedings.

On Sunday, Mayorkas said he had no plans to quit over his handling of the border crisis and that he is prepared to continue carrying out his daily tasks despite any inquiries by House Republicans.

While discussing President Biden’s visit to El Paso, Texas, on ABC’s “This Week,” host George Stephanopoulos asked Mayorkas whether he would resign in response to McCarthy’s request for him to do so. Mayorkas said “No,” adding that he has much work to do.

In November, a DHS official dismissed earlier efforts to impeach Mayorkas as little more than “finger-pointing” from Congress. A representative for Secretary Mayorkas stated Secretary Mayorkas is happy to pursue the great purpose of this Department, support its exceptional personnel, and serve the American people. The representative added that the Department had not had a major legislative reform in over 40 years, that the system is flawed, and the laws are out of date; members of Congress should do better than pointing fingers and demanding change.