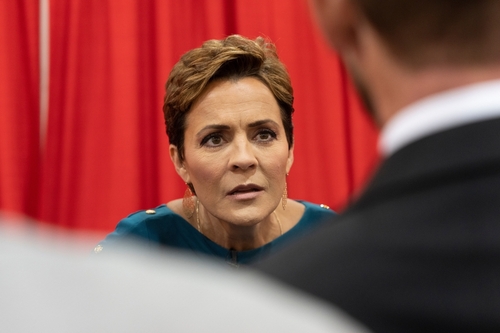 Katie Hobbs, who was elected governor of Arizona, had asked a judge to impose sanctions on Kari Lake, who had challenged her in the race for governor.

Sanctions were denied, but Hobbs was given slightly more than $33,000 to pay for the cost of hiring expert witnesses during the two-day trial Lake initiated to overturn the outcome of the November 2022 governor’s race.

After losing the election to Hobbs by a margin of 17,117 votes out of over 2.5 million casts, Lake filed suit on December 9 to prevent the election results from being certified. She pleaded with the court to either nullify the election or re-run it in Maricopa County, Arizona’s most populous county.

According to Lake, widespread, intentional misconduct occurred throughout the county on Election Day, particularly concerning malfunctioning ballot-on-demand printers at polling sites and issues with signature verification and ballot chain of custody. After a two-day trial, Sunday’s ruling by Judge Peter Thompson dismissed eight of her ten claims.

Lake came up half a percentage point short in her race against Hobbs for governor of Arizona. Therefore, Lake contested the outcome, arguing that intentional misconduct caused ballot printer issues at some voting stations on Election Day.

After hearing both sides of Lake’s case, Maricopa County Superior Court Judge Peter Thompson ruled against Lake, concluding that Lake had not provided “clear and convincing evidence” of the widespread misconduct he claimed had influenced the 2022 general election results.

Hobbs asked the court to award him $36,990 for his legal representation during the two-day trial and to impose sanctions on Lake.

Because the claims Hobbs brought against Lake in court were not without merit and were not brought in bad faith, the judge ruled that Hobbs should not be punished for filing them. Witness fees, however, were paid for by the court.

Hobbs asked the court for a reimbursement of $5,900 to cover the cost of an expert witness. She also requested $22,451 in expert witness fees and another $4,689.50 to reimburse the person who was tasked with inspecting the ballots in a separate filing.

Kari Lake has also appealed the decision of an Arizona judge who rejected her lawsuit questioning the results of the gubernatorial election she lost in November to Democrat Katie Hobbs. Lake filed the appeal on Tuesday afternoon in Maricopa County, Arizona Superior Court with the support of former President Donald Trump.

On Tuesday, Judge Thompson ruled against Hobbs’ request to have Lake penalized for her lawsuit, but he ordered Lake to pay $33,000 in court costs to Hobbs.

The court’s website does not list a hearing date for Lake’s appeal, but it will likely be fast-tracked after Hobbs is sworn in on January 5.