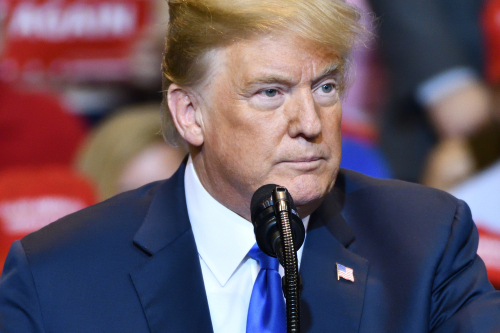 On Monday, former President Trump joined other Republicans in criticizing Senate Minority Leader Mitch “Old Crow” McConnell (R-Kentucky) for helping to approve the $1.7 trillion omnibus spending plan, implying that the Democrats have dirt on him.

Last week, McConnell and seventeen other Republicans voted with all fifty Democrats to adopt the pork-laden package to finance the government and its generosity until September. House conservatives were outraged by the decision.

The next day, the House passed the outrageous spending spree with overwhelming backing from the departing Democratic majority.

Trump attacked McConnell on Truth Social and criticized his wife, Elaine Chao. Republicans on Monday attacked Senate Minority Leader Mitch “Old Crow” McConnell (R-Kentucky) for his participation in the passage of the $1.7 trillion omnibus spending measure, implying that the Democrats have dirt on him.

According to Trump, “the Marxist Democrats” must have something substantial on Mitch McConnell to convince him and a few of his friendly ‘Republican’ Senators to support the horrific “All Democrat, All the Way'” Omnibus Bill. It finances the corrupt ‘Justice Department, “FBI (which RIGGED the Presidential Election! ), and even the Trump-hating Special Prosecutor” yet provides no Broder Security Funding to the U.S. It is also a big concession and a gift to China, which makes “COCO CHOW” extremely pleased! Trump wrote harshly.

The former president continued criticizing McConnell, saying if the “Old Crow” had waited just ten days, the Republican House Majority could have made the “Ominous’ Bill MUCH, MUCH, MUCH BETTER.”  Trumped then stated: Mitch, this is another victory for the Democrats, which would not have occurred “if Trump were president!”

He also included a link to an article by Mollie Hemingway headlined “GOP Can’t Be Successful Until Mitch McConnell Is Gone” from The Federalist that supported his argument.

In her article, the conservative columnist ripped McConnell to shreds on all sides. Comments made by Senate Minority Leader Mitch McConnell on Tuesday demonstrate why he has become the greatest hurdle to the success of the Republican Party, Hemingway started.

Another remark by McConnell that stunned many Republicans was when McConnell stated, incredulously, that he was ‘pretty proud” that under a Democratic administration, they were able to achieve virtually all of our priorities through this omnibus spending bill. Critics stated that McConnell worked so hard to help the Democrats pass a $1.7 trillion left-wing spending spree.

According to Hemingway, no one had even attempted to read the long measure, which was introduced just hours before the vote. Hemingway wrote scathingly that this demonstrates how sick, broken, and unserious the Senate is.

The American people put Republicans into control of the House, and House Republicans had pushed McConnell to push for a smaller, short-term package to keep the government funded while giving them a rare chance to weigh in on Biden’s policies. She said McConnell allies ridiculed House Republican Leader Kevin McCarthy and other House members who attempted to convince Republican senators not to support the Democrats’ spending binge.

The only power the Republicans had was to wait until the Republican party took control in January. They would be in a far stronger position to weigh in on every significant topic in a few weeks. By passing the $1.7 trillion package during the lame-duck session, Republicans will be significantly less able to fight next year against the Democrats’ destruction of the law at the Department of Justice, failure to protect American borders, destruction of the military, and Democratic cooperation with Big Tech to suppress conservative ideas, according to The Federalist writer.

McConnell enabled the intelligence services to be rewarded for suppressing and exploiting the American public. Hemingway added, The budget measure McConnell claimed was beneficial for all provides the FBI with a spanking new headquarters and increases financing for the Department of Justice, thus allowing it to pursue even more political opponents while shielding its political supporters.

As long as Mitch McConnell is the most prominent elected Republican in Washington, D.C., and enthusiastically trashing Republican voters, vociferously advocating Democrat policy goals, pushing for Democrat spending packages worth $1.7 trillion, and weakly advocating Republican objectives, Republicans will face significant difficulties. This is beyond evident, she concluded frankly.