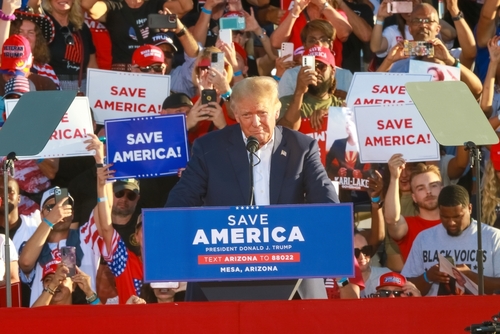 Trump posted on November 22 on Gab that this Election was a disgrace; everything was geared toward Election Day by Republicans. When Election Day finally arrived, the Republican machinery was systematically broken.

Trump added, pointed to the report sent by attorney Mark Sonnenklar, one of 11 roaming attorneys working with the Republican National Committee’s (RNC) Election Integrity program in Maricopa County, they should at the very least redo the Arizona election.

According to Sonnenklar, 72 of the 115 polling places the attorneys visited (62.61 percent) had “material difficulties,” according to the report.

Sonnenklar noted that it is pretty evident that printer/tabulator problems on election day at 62.61 percent of the vote centers resulted in long waits at the majority of vote centers. This caused significant voting suppression.

In addition, Sonnenklar refuted county authorities’ statements that printer/tabulator issues were rectified at 3 p.m. local time and that their impact was “insignificant.” The ten roaming attorneys and Sonnenklar reported that voters had to wait in long lines at 59 of the 115 polling places we visited (51.3 percent).

In many instances, voters had to wait for one to two hours before receiving a ballot, Sonnenklar stated. He continued that many voters likely refused to wait in such long lines, left the polling place, and did not return to vote later.

In reaction to Trump’s remarks, Arizona Republican gubernatorial candidate Kari Lake thanked the former president on Twitter. Lake continued; it was nothing short of a massive disenfranchisement of the whole Arizona First slate and the citizens of Arizona.

According to the Arizona secretary of state’s office, Arizona Lake is behind Democratic candidate Katie Hobbs by around 17,100 votes, 49.7% to 50.3%.

Hobbs declared victory last Thursday, but Lake has not yet conceded.

The Elections Integrity Unit of the Arizona Attorney General has written a letter to Maricopa County authorities requesting answers to “many issues” that county voters encountered on Election Day.

Assistant Attorney General Jennifer Wright said in the letter the Elections Integrity Unit of the Arizona Attorney General’s Office had received hundreds of complaints since Election Day regarding concerns connected to the administration of the 2022 General Election in Maricopa County. Beyond mere conjecture, many complaints contain eyewitness statements that raise questions about Maricopa’s compliance with Arizona election law, Wright added.

Wright demands that the county responds by November 28.

Lake informed the Daily Mail after the letter was issued that she “will become governor.”  Maricopa County’s elections are conducted worse than in “banana republics around this worldwide,” Lake told the site.

On November 21, Lake released a video on Twitter stating that “whistleblowers are coming forward” regarding election day voting irregularities in Maricopa County and that her attorneys are “working tirelessly to gather information.”

According to The Hill, the Republican contender for Arizona attorney general, Abe Hamadeh, and the Republican National Committee (RNC) challenged preliminary election results on Tuesday, saying that election authorities bungled the midterm election. Kris Mayes led Hamadeh by a narrow margin of 510 votes, which has forced a recount under state law.

Regarding the complaint, Hamadeh tweeted that Arizonans want answers and deserve openness regarding some election officials’ terrible ineptitude and mismanagement of the General Election. Hamadeh stated that he would continue to fight until ALL voters have access to justice. Hamadeh has filed a lawsuit contesting the results.

“The @GOP is happy to join this legal action,” tweeted RNC Chairwoman Ronna McDaniel. Maricopa County’s electoral failures disenfranchised Arizonans, and they were going to court to obtain the answers that voters deserve.

Two Arizona counties, Mohave County and Cochise County have decided to defer the certification of the midterm election results.