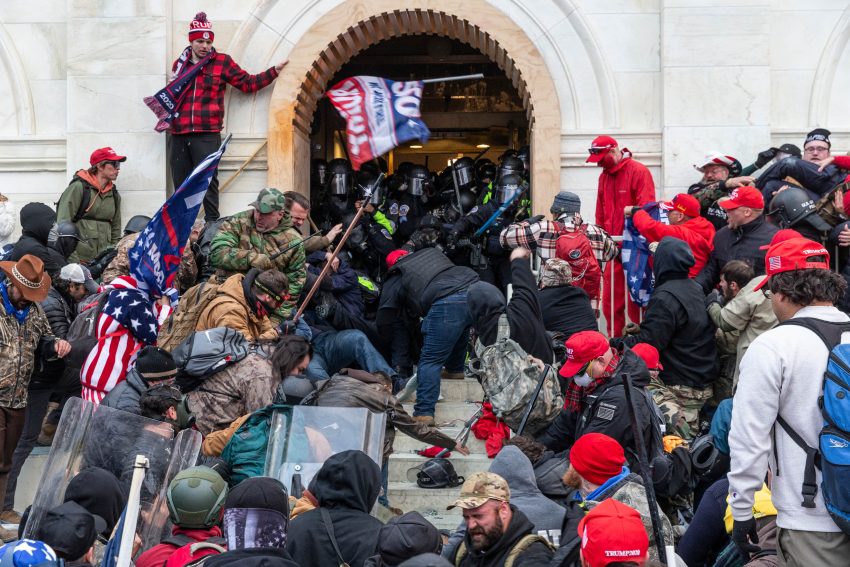 In the first Capitol rioting case to go to trial, the first defendant was sentenced to more than seven years in prison. Among other crimes, he was charged with obstructing Congress and threatening his children. In Washington, US District Judge Dabney Friedrich sentenced Guy Reffitt, a member of the Three Percenters militia group, to 87 months in prison. A jury convicted Reffitt in March.

Prosecutors had sought a 15-year sentence. According to the government, Reffitt was armed during the riot and threatened to harm lawmakers physically. He failed to enter despite leading the first wave of attackers up the Capitol terrace steps. Reffitt’s lawyer, Clinton Broden, was hoping for a lower sentence. As Broden stated in his email, the sentence imposed was less than half of the government’s request, and the Judge had rejected the government’s terrorism enhancement.

After a 44-minute fight, Reffitt was halted by police pepper spray and retreated. Prosecutors showed evidence that he waved other rioters ahead even after he stopped.

According to Steven D’Antuono, assistant director in charge of the Federal Bureau of Investigation’s Washington field office, the sentence today reflects the seriousness of Mr. Reffitt’s crimes. It underscores his disregard for one of our democracy’s pillars, the peaceful transition of power.

The case served as a test for how juries will weigh evidence in other trials later this year, including the trials of militia members charged with seditious conspiracy, the most serious charge stemming from the insurrection. Over 800 people have been charged with the attack by the US Justice Department, and most of those sentenced to date have pleaded guilty rather than been to trial.

Because his son reported him to the FBI before the Capitol siege, Reffitt’s case also attracted widespread attention. Later, he threatened his son and daughter to keep quiet about his involvement in the riot.

In addition, he was convicted of obstruction of justice for threatening his children, obstruction of Congress, and carrying a loaded firearm on federal property. Even so, Jackson Reffitt turned his father in and became the government’s star witness.

In remarks to other people gathered at former President Donald Trump’s rally before the attack, Guy Reffitt specifically targeted Nancy Pelosi and Mitch McConnell. During the assault, Reffitt wore a tactical helmet and bulletproof armor and had flexcuffs similar to those used by police.

According to the US, in a sentencing memo dated July 15, he told other members of his militia group at the Ellipse that he planned to physically drag Senator Pelosi from the Capitol building while hitting her head with every step.

He argued for no more than two years in prison, arguing that many of the defendants who received longer sentences had committed far worse crimes, like assaulting police officers. Reffitt never entered the Capitol, and prosecutors’ portrayal of his actions that day was “overdramatic,” he said.

During Reffitt’s sentencing, his lawyer wrote that his client had a romanticized view of what would happen on January 6 and that he marched on the Capitol after Trump urged his supporters to do so. He also implied Reffitt was suffering from career problems and spending too much time online.

Mr. Reffitt, according to his lawyer, felt inadequate after losing his job in 2019 and felt he was failing the family he always worked so hard to support. His lawyer said on July 29 that asking for more than two years makes a mockery of the criminal justice system.