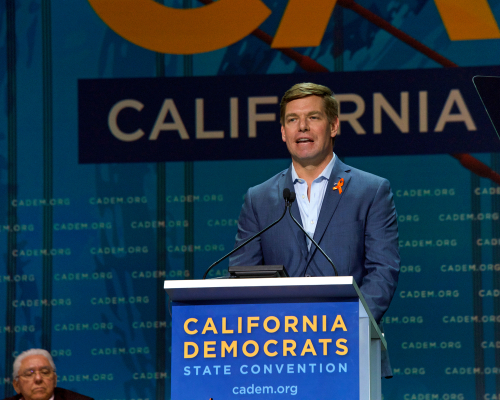 As a member of Congress, you should be knowledgeable about the Bill of Rights and the US Constitution. If you are unsure, you might want to say away from Twitter.   Rep. Eric Swalwell, D-Calif., decided to attack Republican Gov Ron DeSantis on Twitter. During his attack on Florida Gov., Swalwell falsely claimed that ‘separation of church and state’ is part of the Bill of Rights.

During the weekend, DeSantis helped campaign for Republican candidates in Pennsylvania and Ohio. As he spoke on the road, he praised Florida’s efforts to push back against critical race theory and require schools to teach American civics.

Our responsibility is to ensure our students know what it means to be an American when they graduate from our schools. In his speech, DeSantis said that our rights come from God, not the government.

In his attack on DeSantis, Swalwell argued that the Bill of Rights protects “separation of church and state,” which is not mentioned in the document.

“It’s not like the separation of church & state is in the Bill of Rights or anything…” Swalwell responded sarcastically to a clip of DeSantis’ speech posted by The Hill.

Twitter users criticized Swalwell for attacking DeSantis for invoking God and pointed out that “separation of church and state” isn’t in the Bill of Rights.

According to political consultant Ellen Carmichael, the origin of rights (God/nature, not government) isn’t a religious notion.

Putting aside that there is an ‘establishment’ clause, not a ‘separation’ clause … I find it incredible that this quote from DeSantis would be the one to set him off on this point, added attorney Casey Mattox.

Ed Morrissey of HotAir tweeted, Here’s a congressman who doesn’t know what the Constitution actually says. Separation of church and state is a political argument that emerged from the Establishment Clause, but it isn’t in the Constitution, the Bill of Rights, or anywhere else.

A few hours later, Swalwell mocked what he called a “right-wing meltdown” in another tweet.

As predicted, the right is having a meltdown over this. It’s time to keep the conversation going. Swalwell added a screenshot of Cornell Law School’s description of “Separation of Church and State.”

While Cornell Law School’s description of the separation of church and state noted that it refers to the Establishment Clause in the First Amendment, it did not state that it is found in the Constitution and instead traced the phrase to the early 1800s during the presidency of Thomas Jefferson.

Politicians and media members have argued that the “separation of church and state” is a constitutional right prohibiting the invocation of religion and God in public places. The phrase, however, does not reflect the Founders’ intent, according to constitutional experts and lawyers.

Separation of church and state is not a religious issue, and it’s about banning religion in public. There should be a ban on it anywhere there is a government. At this point, they misapplied the use of the term. It might have some meaning, but it isn’t spelled out in the Constitution. First Liberty Institute President Kelly Shackelford recently told Fox News Digital that the Constitution is not about establishing a religion.