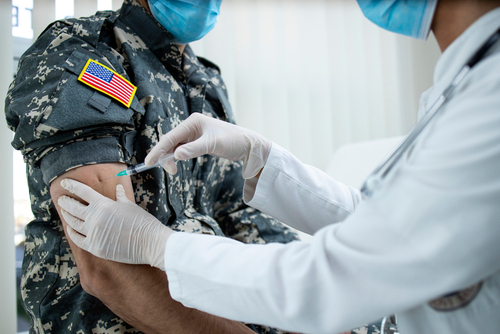 McCarthy stated on the Fox Business Network program “Sunday Morning Futures” that legislators are working on the $817 billion national defense bill to remove the vaccination requirement for military members.

The requirement for the vaccine was implemented in August 2021.

McCarthy stated that they would obtain the removal of the vaccination requirement for our armed forces because, as we’ve discovered, they’re kicking out men and women who have been serving, McCarthy said, citing recruiting difficulties.

McCarthy said that this would be the first victory of the Republican majority, adding that they wanted more of these and they should begin pursuing them immediately.

Approximately 3,717 Marines, 1,816 soldiers, and 2,064 sailors have been dismissed for refusing the COVID-19 vaccination; however, a small number have been permitted to continue on duty due to religious or medical exemptions.

According to Axios, approximately 11,500 Army, National Guard, and Reserve members denied the COVID-19 vaccination, while 97% of the Army’s active soldiers received the injection.

The U.S. Army, according to Army Secretary Christine Wormuth, has only reached 75% of its 60,000-person recruiting goal for this year. McCarthy also stated on Sunday that he had met with President Joe Biden the previous week and explained very clearly what the change with the new Republican majority would be. McCarthy stated that the NDAA would not move ahead if the vaccination requirement is not repealed, citing his discussion with President Biden.

Each year for the past six decades, the NDAA has been passed detailing the Defense Department’s budget and expenditures. McCarthy, the Republican politician, who plans to Replace Nancy Pelosi as the Speaker of the House of Representatives, said, He had been very direct with the president, and the president had worked with him on this.

The White House acknowledged on Sunday that it is evaluating McCarthy’s plan to eliminate the military’s requirement that all soldiers be fully vaccinated, despite Defense Secretary Lloyd Austin’s commitment on December 3 to continue enforcing the order.

Leader McCarthy brought this to the president’s attention, and the president said he would examine it, White House spokesman Olivia Dalton told Reuters. However, she added that the defense secretary has proposed keeping the mandate, and the president supports his decision. “Discussions regarding the NDAA are ongoing.”

Republicans have urged the Biden administration to repeal the vaccination requirement for military personnel, arguing that the decision, which has been flooded with litigation, has hindered the National Guard’s ability to attract new members.