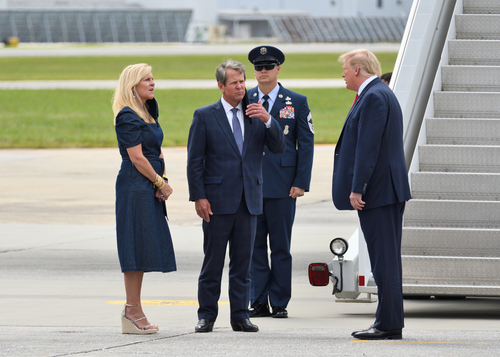 A judge ruled on Monday that Georgia Gov. Brian Kemp must testify before a special grand jury  regarding the investigation on former President Donald Trump regarding his perceived attempts to overthrow the state’s 2020 election results.

Robert McBurney, a Fulton County Superior Court judge, ordered Mr. Kemp, a Republican, to comply with a subpoena issued by Fulton County District Attorney Fani Willis. Attorneys for Mr. Kemp argued that he could not be forced to testify due to a legal doctrine called sovereign immunity, which generally protects state officials from lawsuits.

According to the judge, sovereign immunity applies to civil litigation, and nothing about this special grand jury involves or implicates civil practice.

Raffensperger and Kemp both drew the ire of Mr. Trump when they refused to believe that the elections were fraudulent and that Democrats were stealing votes. Derek Bauer, a lawyer for Mr. Kemp, did not immediately return an inquiry for comment.

The special grand jury has heard from about 60% of the witnesses it needs to hear from, and Ms. Willis said she hoped it would conclude by the end of the year. Many people are unsuccessfully fighting our subpoenas, she said.

In the end, Mr. Kemp won his request to delay his testimony until after the Nov. 8 election, when it will be determined whether he will serve a second term. For the second time, he’s facing Democrat Stacey Abrams, whom he defeated in 2018.

Judge McBurney said that this criminal grand jury investigation should not be used by the District Attorney, the Governor’s opponent, or the Governor himself to influence the outcome of the Governor’s reelection campaign.

On Monday, Judge McBurney immediately denied an attempt by Attorney Kenneth Chesebro to block a subpoena for his testimony. According to Mr. Chesebro, his potential testimony would be barred by attorney-client privilege and lawyer ethics rules. As a result, Judge McBurney rejected that argument, saying Mr. Chesebro could testify about several topics unaffected by privilege claims.

Mr. Trump argued with Mr. Kemp after the November 2020 election for not intervening to overturn the results on the grounds of fraud. At the time, Kemp said he followed state law in certifying the results. In May, Trump supported former Sen. David Perdue’s primary challenge to Mr. Kemp’s reelection bid, but Kemp won.

The special grand jury, selected in May, has been gathering witnesses’ testimonies and has received more than 100,000 pages of materials from Mr. Kemp’s office, Mr. Kemp’s lawyers said. Former Trump lawyer Rudy Giuliani appeared before the grand jury on Aug. 17.

1 thought on “Judge Rules Kemp Must Testify in Trump Probe”