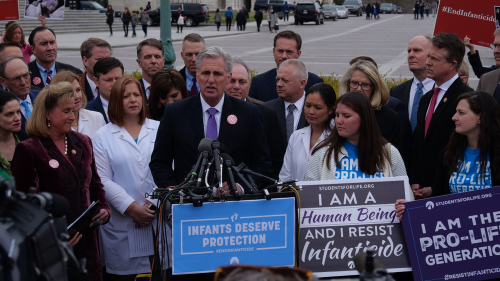 In a statement on Thursday, Republican leader Kevin McCarthy aligned himself with former President Donald J. Trump. He condemned federal law enforcement over the search of Mar-a-Lago, resulting in the court-ordered seizure of classified documents at Mar-a-Lago as an “assault on democracy.”

In a half-hour speech delivered from Scranton, Pa., Mr. McCarthy seized the themes that President Biden was addressing in a prime-time address. He turned them on their head against Democrats in a remarkable attempt at political jujitsu aimed at muddying the waters about Mr. Trump’s conduct and handling of sensitive government information.

Mr. McCarthy’s remarks mainly were a point-by-point condemnation of Mr. Biden’s policies, delivered from a competitive district his party hopes to wrest from the Democrats in November’s midterm elections.

In recent weeks, the top Republican in the House has seen his party’s chances of sweeping into the majority diminish. In his remarks, McCarthy said that the current president had launched a serious assault on democracy with policies that have “severely wounded America’s soul.”

Mr. McCarthy argued that Biden is right: Democracy is on the ballot in November, and Joe Biden and the radical left in Washington are gradually dismantling our democracy in Washington.

According to Mr. McCarthy, Mr. Biden’s behavior is the same as Mr. Trump’s. McCarthy said that the raid on Donald Trump’s home was conducted by Joe Biden and the politicized Department of Justice. “That is an assault on democracy.”

According to the DOJ, the search at Mar-a-Lago came after government officials failed for a year and a half to retrieve presidential documents, including classified material, from Mr. Trump. The DOJ efforts included a subpoena they claim was not fully complied with.

The Democrats have blamed Republicans for lower test scores of students due to school closure during Covid-19. Democrats also claim that the overturning of Roe vs. Wade was also due to Republicans. Even though the overturn came over a year and a half into Biden’s term. Student loan forgiveness was perhaps one of the biggest overreached of the Biden administration, by using a 2003 law for the military and special powers for covid-19 as justification.

However, McCarthy said Biden was at fault. About comments that Mr. Biden made at a recent fundraiser in Maryland denouncing “extreme MAGA philosophy” as akin to “semi-fascism,” he demanded that the president apologize “for slandering tens of millions of Americans as fascists.”