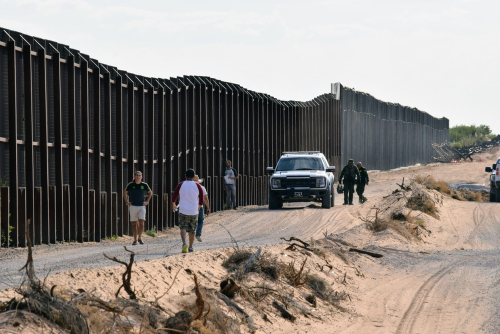 A group of Democratic senators is pushing for Homeland Security Secretary Alejandro Mayorkas to reconsider his department’s preparations for the elimination of Title 42, a significant Trump administration program for expelling some illegal immigrants.

Due to the Biden administration’s failure to prepare for an increase in illegal migrants at the border when the program stops, Democratic Senators Kyrsten Sinema, Mark Kelly, Jon Tester, and Maggie Hassan wrote to Mayorkas on November 18., that the U.S. is not prepared for the increased influx of new immigrants.

A public health law from the Second World War, Title 42, was applied during the COVID-19 pandemic more than two years ago. Title 42 relied on the Centers for Disease Control and Prevention Director’s determination that there is a serious risk of introducing a communicable disease into the United States. In that case, individuals may not be admitted to the country under this law.

Every week, border officials see thousands of unscreened, unvetted, and unlawful arrivals from dozens of nations, then-president Donald Trump remarked on March 20, 2020, while announcing the Title 42 ruling. Trump added that this problem has existed for decades.

During a worldwide pandemic, these tremendous movements threaten to produce a perfect storm that would spread the illness to our border agents, migrants, and the general population, Trump said upon enacting the law.

A federal judge ordered on November 15 that the Biden administration must terminate Title 42, which has resulted in the deportation of almost 2 million illegal immigrants, by December 21.

During the Biden administration, unprecedented numbers of illegal immigrants entered the United States. In the fiscal year 2022, U.S. Customs and Border Protection will meet more than 2.3 million migrants along the southern border, including more than 230,000 migrants from  October.

On April 1, 2022, after the Director of the Centers for Disease Control and Prevention issued the Public Health Determination to end the Title 42 Order, the senators wrote that they had expressed concern with DHS’ preparations regarding the end of Title 42, particularly as the situation has at times deteriorated.

Record yearly occurrences have created intolerable circumstances. In Arizona, overcrowded shelters have been reported, they stated. This month, nearly 700 migrants were discharged directly onto the streets of El Paso owing to overpopulation. This creates a dangerous scenario for migrants and communities. The Democrats want Mayorkas to respond to nine concerns they had by December 1.

Earlier this month, Kevin McCarthy, minority leader of the United States House of Representatives, demanded that Homeland Security Secretary Alejandro Mayorkas quit over the administration’s border policy, pledging to initiate investigations next year that might lead to impeachment.

According to McCarthy, they will employ the power of the purse and the subpoena. McCarthy remarked during a press conference in El Paso, “Let me be clear:” Those guilty for this tragedy will be held accountable. If Secretary Mayorkas does not quit, the House Republicans will review every order, action, and omission to see whether impeachment proceedings may be initiated.

Last month, the U.S. Border Patrol arrested a record number of migrants along the southern border, totaling over 2.4 million for the fiscal year.

In April, the CDC tried to stop the policy on May 23. Democratic senators expressed similar concerns at the time, and a federal court eventually struck it down after several Republican states filed suit.