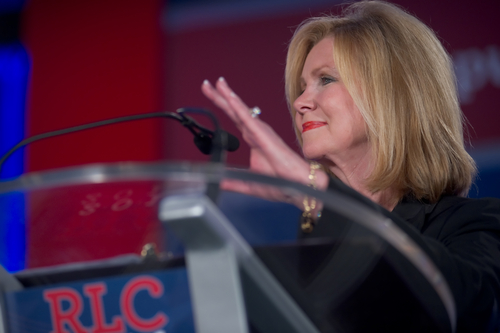 As Democrats rush to force a vote before the end of the year, Republicans are fighting back against the inclusion of “woke” military policies within the National Defense Authorization Act (NDAA), the annual defense policy bill. They also intend to work to include provisions that counter “wild” Biden administration policies.

Due to the short amount of floor time before Congress adjourns for the year, there have been discussions about Democrats perhaps attempting to include the NDAA in a final end-of-year budget. According to Senate Republicans, this tactic raises doubts about Congress’ ability to adopt an NDAA, which determines military strategy and funding levels for the Pentagon and other institutions involved in the nation’s national security architecture.

Sen. Marsha Blackburn, R-Tenn., accused Majority Leader Chuck Schumer, D-N.Y., of politicizing the NDAA by holding up its passage until the very last minute and blocking frank discussion of its provisions.

Blackburn claimed that despite the defense authorization being passed 61 years in a row, the military appears to be Chuck Schumer’s new favorite political football. She further stated that she is convinced that number 62 will receive significant support from all sides of the political aisle, which makes this rushed schedule even less necessary.

Republicans disagree with several of the Democratic Party’s proposed amendments to the NDAA. Gop, led by Sen. Tom Cotton, R-Ark., introduced the “Don’t Draft our Daughters” amendment after Democrats added language allowing women to be drafted into the military in the fiscal year 2023 NDAA.

In other cases, Republicans are attempting to incorporate wording that will undermine the initiatives of the Biden administration that they find unacceptable.
Assuring that the NDAA protects our troops from being fired due to Biden’s vaccine mandate, Blackburn told the media that she is concerned about President Biden’s military vaccine mandate and that she will work to protect Americans against the “New Axis of Evil,” including China and other adversaries. As the military struggles to find new recruits, she claimed that weakening the vaccine mandate is even more critical.

Following Biden’s declaration that the pandemic is “finished,” Blackburn presented a bill in September that would stop any punishment meted out to military members seeking religious exemptions from the Pentagon’s COVID-19 vaccine requirement.

Additionally, the senator proposed two changes to the NDAA in June to ensure that parents of service members have control over their children’s education and that congressional funding for “woke” diversity, equity, and inclusion Department of Defense initiatives will be subject to stricter guidelines. Democrats opposed both amendments during a markup by the Armed Services Committee.

In a report published over the summer, the right-wing Heritage Foundation urged Congress to eliminate NDAA measures that would “promote corporate wokeness.”

A clause in the House legislation, which was enacted in July and is currently being negotiated in the Senate, would call for public firms to yearly publish “the racial, ethnic, gender identity, sexual orientation, and veteran status of their board directors, nominees, and senior executive officers,” the news source said.

Additionally, the clause would establish a group whose primary goal would be “promoting company diversity.”