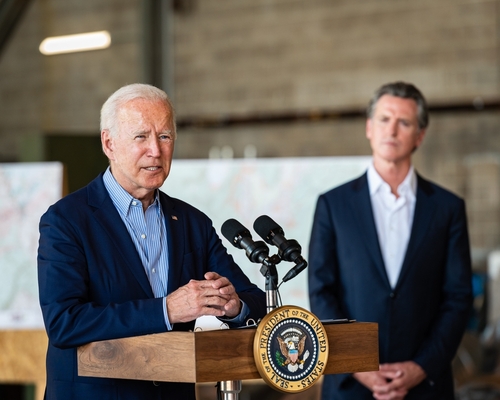 According to the Biden administration, the United States is entering a “decisive decade” as it faces Chinese competition and an attempt by Russia to overthrow the world system, climate change, energy, food security, international terrorism, and illness.

The Biden administration has unveiled its national-security policy, which outlines the government’s approach to global issues. The strategy outlines the United States’ efforts to compete with its rivals, such as China and Russia while establishing alliances with nations that share American interests and objectives.

The policy is based on the concept that geopolitical rivalry and shared transnational dangers are interwoven, National Security Advisor Jake Sullivan told Georgetown University on Wednesday.

The U.S. cannot develop the broad coalitions necessary to outcompete our competitors if we ignore the issues that directly impact billions of people’s lives, he added.

Mr. Sullivan stated that the approach was delayed for months because experts needed to incorporate lessons from Russia’s eight-month assault on Ukraine. The strategy, which is mandated to be drafted by every administration, informs a different document that has yet to be produced by the Pentagon, called the national defense strategy, which guides spending and other military activities. Mr. Sullivan stated that the approach was compatible with the administration’s objective of strengthening the U.S. military and intelligence capabilities in light of China’s substantial military expenditures.

In addition to highlighting the challenges posed by China and Russia, the plan downplays the threat of terrorism. It highlights a variety of transnational problems, such as food security, illness, pandemics, and climate change, according to Mr. Sullivan.

He added that the national security policy also understands that climate catastrophe is the biggest shared challenge we face without quick global action in this pivotal decade. Previous national security policy documents had identified China and Russia as global competitors to the United States, and Moscow’s invasion of Ukraine in February warned that Russia’s danger must not be ignored. Russia is “still profoundly dangerous,” according to a White House paper.

However, the deterioration of Russia’s military and its position in the world arena since the invasion and battlefield setbacks by Ukrainian troops have strengthened the notion that China is the United States’ greatest danger.

The new approach identifies Beijing as the sole rival to reform the international order, and the growing economic, diplomatic, military, and technical might as Russia’s strength declines.

The strategy largely codifies the approach toward Beijing that the Biden administration has pursued since assuming office: investing more at home to boost American economic and technological competitiveness and relying more on the U.S.’s extensive network of alliances to limit Beijing’s maneuverability.

In the third pillar of this strategy, the United States will responsibly compete with China to defend American interests, according to the document, while also seeking cooperation with Beijing on climate change and recognizing the unease many countries feel when caught between the United States and China.

The policy states we also wish to avoid a world in which competitiveness escalates into a world of inflexible blocs. We are not interested in confrontation or a new Cold War. Instead, we want to assist every nation in exercising the liberty to choose what is best for its interests, regardless of size or power.

In conversations with Chinese leader Xi Jinping, President Biden has highlighted the United States’ appeal for collaboration and the need to restrain rivalry to avert a new Cold War. Beijing and Mr. Xi have frequently replied with indifference to these overtures, claiming that U.S. actions do not match Mr. Biden’s words.

Taiwan, the U.S. ally and democratically controlled island that Beijing claims as its own has been a source of escalating tension. China might attack Taiwan within the next four or five years, according to U.S. officials, and has taken critical lessons from Russia’s invasion of Ukraine and the U.S. and allies’ response.

The Biden administration has followed a Trump administration push to bolster support for Taiwan. In contrast, Beijing has upped military and economic pressure on the island this summer, including staging huge, multiday drills.

As part of the strategy, the U.S. offers reassurances and warnings to China, explaining that it opposes Taiwan’s independence, a red line for Beijing, but will resist any use of force or coercion.

The document’s focus on U.S. alliances, particularly on bringing partners in Europe and the Indo-Pacific into “new and deeper” ways of collaboration, is likely to be more problematic for Beijing.

Michael Mazarr, a defense and security expert at the Rand Corporation, stated that while this emphasis is likely to cause concern in Beijing, allies should expect the Biden administration to improve policies on military sales, technology transfers, and other measures to better accommodate their interests.

In light of Mr. Mazarr’s declaration that the next decade will be important in the struggle with China, the Biden administration will need to swiftly implement economic and investment strategies to compete for influence in the developing countries and strengthen defensive capabilities.

In pledging to engage all countries and not use them as puppets in great-power conflicts, the United States is attempting to regain influence among emerging nations. Some developing nations have claimed that the United States’ economic sanctions and stances on human rights and environmental protection are driving them into the arms of Beijing and Moscow.

“You condemned us,” Brazilian Finance Minister Paulo Guedes said in an interview on Monday, alluding to worldwide concern about Brazilian President Jair Bolsonaro’s environmental and human rights record. Then we grew further apart, and the Russians and the Chinese responded, ‘No problem. We trade, Guedes stated.