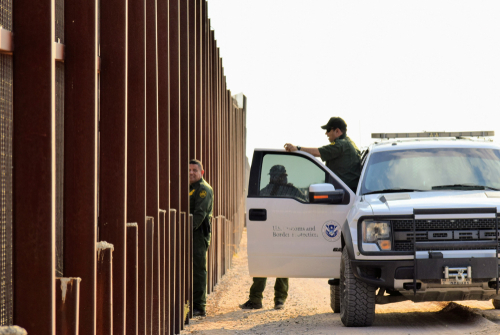 Arizona’s Republican governor, Doug Ducey, did not comply with the Biden administration’s request to remove the shipping containers used to fill in gaps in the U.S.-Mexico border wall. This week, the state began filling other holes with more cargo containers.

Last week, the governor’s office said he did not intend to comply with the Biden administration’s demand for the removal of shipping containers the state placed on federal and tribal properties to fill in some gaps in the Yuma Sector, near the Arizona-California border.

On Friday, Governor Ducey sued the United States Bureau of Reclamation and other federal officials instead of complying. In a press release, Ducey stated illegal activities overrun our border communities due to the Biden administration’s failure to protect the southern border.

“Arizona is taking action” on behalf of our residents to protest. With this action, we’re pushing back against federal bureaucrats’ attempts to roll back our success, he concluded.

Ducey added that it was unacceptable to disregard Arizona’s and its inhabitants’ safety and security. Arizona will do what “Joe Biden refuses to do and secure the border” in whatever way possible. Adding that they are not back down.

Additionally, Ducey commanded that the “Border Barrier Mission” continue in Cochise County in the southeastern portion of the state this week.

Thursday, he tweeted, “Where there is a will, there’s a way.”

Republican Yuma Mayor Douglas Nicholls thanked the governor for his efforts to plug in breaches in the border wall.

On Friday, he told Fox News host Dana Perino that 5,000 and 6,000 illegal immigrants enter the Yuma Sector each week. In addition, the border patrol is seizing an unprecedented amount of fentanyl and methamphetamine.

Nicholls explained that they identified some of the most heavily traveled places through collaboration with the governor’s office.

The mayor stated that closing important gaps shifts the traffic and makes the border easier to handle. It doesn’t halt the traffic, but it transfers it to locations where it’s easier to concentrate more of that activity, making it simpler for law enforcement and border patrol to deal with, Nicholls said.

In a letter to Ducey earlier this month, the Biden administration accused the state of Arizona of trespassing on federal and tribal land by placing cargo containers along the border.

Nicholls contends that 300,000 persons who have passed through this year alone have been trespassing. He does not recall seeing a letter sent to anyone in an attempt to stop any of that.

U.S. Customs and Border Protection stated that 310,094 migrants were caught illegally entering the United States in the Yuma sector during the fiscal year 2022, up 171% from the previous year.

Chochise County is included in the Tucson Border Sector, which recorded 251,984 border arrests, a 32 percent increase from the previous year.

Nearly 2.4 million persons were caught along the southwest border in the fiscal year 2022, surpassing the previous year’s total of approximately 1.7 million.

During the latter two years of former President Donald Trump’s administration, around 977,000 and 458,000 were caught, respectively.