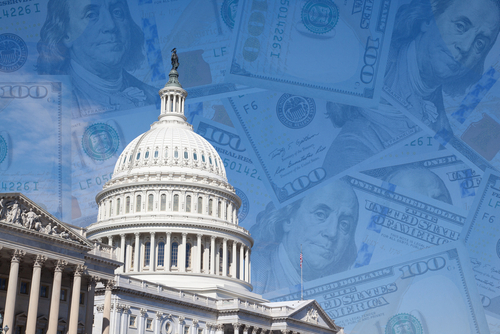 A vote of 68-29 achieved bipartisan approval. It will now go to the House, where it is expected to pass before it is sent to President Biden.

Compared to last year’s $782 billion, the omnibus legislation includes $858 billion in military spending, an increase of about 10% over the White House’s request for $45 billion. Additionally, it includes $772.5 billion in nondefense discretionary spending, up almost 6% from $730 billion. Compared to the previous fiscal year, discretionary spending totaled $1.65 trillion, an increase of $1.5 trillion.

A change to the 1887 Electoral Count Act is included in the bill, as well as revisions to the U.S. retirement system. A ban on TikTok on government devices is also widened.

The House would vote on the bill Friday. As frigid winter weather descended on much of the country, lawmakers faced a weekend deadline with funding the government or risking a partial shutdown.

Some Republican senators and representatives objected to the spending package, saying it was bloated and unnecessary. Some critics say lawmakers should have had more time to review the bill before voting rather than forcing them to vote after only a few days. “It’s three times the size of the Bible,” said Sen. Rick Scott (R., Fla.) of the more than 4,000-page spending bill. “It’s Democrats’ spending.”

Republican leaders in the House had also argued that talks on the bill should not begin until the next Congress when Republicans control the chamber. The Senate negotiators in both parties ignored that call.

Senate Majority Leader Chuck Schumer (D-NY) stated that a compromise had been reached to advance the omnibus bill. Schumer claimed it took a while, but it had been worth it, adding that while the timeline is uncertain, he expects to expedite the voting process for the amendments.

The approval of the omnibus budget bill was held up by a border policy enacted by the administration of Donald Trump that permits immigration agents to deport migrants without being processed during a public health emergency.

The measure, led by Sen. Mike Lee (R-UT), would maintain Title 42 and remove money for the office of Department of Homeland Security Director Alejandro Mayorkas if the Biden administration does not reinstall the border control strategy.

Senator Chris Murphy (D-Connecticut) stated that regarding immigration policy, “we have opposing views,” and this issue will not be resolved with this budget. Murphy, the chairman of the Senate Appropriations Homeland Security Subcommittee, criticized Lee’s immigration initiatives and added that it would be unconscionable to allow this debate to halt supplies to Ukraine to keep people alive during the harsh winter.

Meanwhile, Lee said Wednesday evening to Fox News, that he urged for a vote on at least one amendment – whether or not to keep Title 42. Because Title 42 is the only thing between us and complete “chaos.” The battle to preserve Title 42 had initially dashed expectations that legislators would vote on the omnibus bill overnight.

Since the spring, the Biden administration has pushed to terminate the practice, alleging that the pandemic health emergency on which it was predicated has dissipated (despite extending the emergency last month). A coalition of states led by Republicans has filed a lawsuit in federal court to prevent the president from terminating the policy.

A district court judge deemed Title 42 “arbitrary and capricious,” upon which the Biden administration was ordered to cease by Wednesday; however, Supreme Court Justice John Roberts postponed that deadline when the court was requested to intervene on Monday.

On Tuesday, the Biden administration petitioned the court to halt the program by requesting an extension until at least December 27 to give immigration agents time to prepare for an influx of illegal immigrants at the southern border.