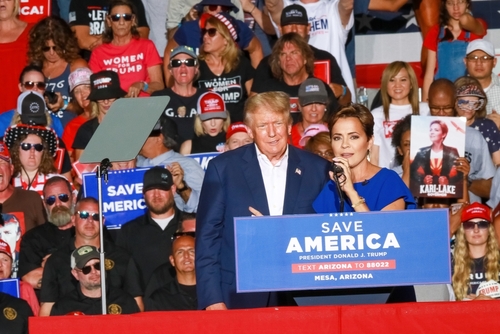 A lawyer said that the Kari Lake lawsuit might facilitate Trump’s reinstatement as president. A lawyer for Former President  Donald Trump has said that a lawsuit filed by Republican candidate for Arizona governor Kari Lake may help the former president regain the presidency.

In an interview on the One America News Network (OANN), attorney Christina Bobb made the comments while discussing Lake’s legal efforts to overturn the Arizona governor election, which she lost to Democrat Katie Hobbs.

Lake claims that “hundreds of thousands” of votes in Maricopa County were “contaminated.”

Lake is also contesting the certification of the midterm election results and requesting that a judge proclaim her the winner.

While addressing the case, OANN anchor Dan Ball questioned Bobb whether Trump could claim he was “screwed” out of the election if Lake wins and establishes that Arizona’s elections are “rigged.”

Former OANN anchor Bobb said that it would be fascinating. She then went on to add that she was referring to a single state that we know it. She said that Trump would need three states, so she wouldn’t say immediately, but perhaps in the future. But Bobbs anticipates that Lake will streamline the procedure,

Lake requests that a court either declare her the winner of the Arizona governor race or order a recount in Maricopa County. During the hearings, Judge Peter Thompson gave Maricopa County election officials and Hobbs until Monday, December 19, at 9:00 a.m. to submit motions to dismiss the lawsuit, which the defendants’ attorneys indicated they would do.

Lake stated in a statement following the court hearing: The hearing about her case held today was informative. Lake expressed that the court acknowledged the quantity of evidence produced by her team. She went on to state that she is grateful to Judge Peter Thompson and his colleagues for the work they perform. Furthermore, she and her team believe that if given a chance, they will expose this election for the farce that it was.

Nicole DeMont, the campaign manager for Hobbs, referred to the lawsuit as a “nuisance” in a statement issued the day after Lake filed her claim.

DeMont made a derogatory remark that  Kari Lake needs attention like a fish needs water.

Independent election experts and local election authorities from both parties have confirmed that this election was safe, secure, and fair.