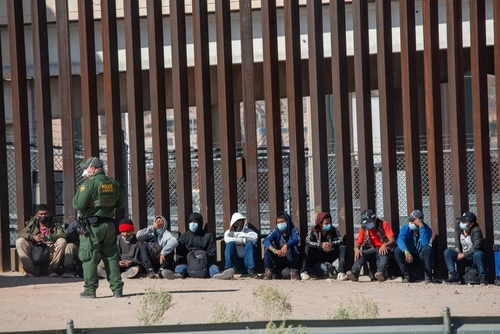 Migration wave drives record arrests at U.S. southern border.  More than four times as many Venezuelan, Cuban, and Nicaraguan migrants were apprehended in the previous year.

The surge of migration during the last year resulted in a record number of arrests on the southern border. According to newly released statistics from U.S. Customs and Border Protection,  a record-breaking 2,2 million arrests of unlawful border crossers have been made in the past year. Separately, 172,508 individuals were processed at U.S. border crossings with Mexico.

In accordance with Title 42, a 1940s public-health statute first utilized by President Trump to send back migrants at the start of the epidemic in March 2020, the Border Patrol returned around 48% of the 1,054,084 persons captured after crossing the border last year. In general, the remaining migrants have been permitted to wait in the United States while they pursue asylum or other claims in federal immigration court. This procedure can take years due to a backlog of around 1.9 million pending cases.

A record number of arrests were made at the southern border for the second consecutive year. In the early months of the Covid-19 outbreak, the Trump administration enforced a near-total border lockdown and swiftly ejected most illegal immigrants apprehended crossing the border.

Illegal border crossings began to increase again in the late spring and summer of 2020, President Trump’s final year in office, and then skyrocketed when President Biden took office in 2021.

During this fiscal year (up to September 30), Venezuelans, Cubans, and Nicaraguans were arrested at a rate four times greater than the previous year. All three nations were severely impacted economically by the pandemic and have seen severe political repression at the hands of authoritarian administrations. Due to a lack of solid diplomatic relations with these states, the United States has been unable to deport these migrants, which has increased their desire to enter the country. Most of these migrants were released into the United States or held temporarily while pursuing asylum or other claims.

So far this year: 187,286 Venezuelans have been apprehended illegally crossing the border, including 33,748 in September. As part of Title 42, the administration announced earlier this month that border officers would begin returning Venezuelans arrested at the southern border to Mexico.

Before agreements with the United States, Mexico would not let the return of Venezuelans and the vast majority of other migrants to its territory.

The new policy is designed to discourage Venezuelans from illegally crossing the border, as they are no longer permitted to remain in the United States and file asylum requests. The Department of Homeland Security is claiming that since the implementation of the new strategy, border arrests of Venezuelans have decreased by more than 80 percent.

During earlier border surges under Presidents Trump and Obama, families and unaccompanied immigrant children were the majority of individuals arrested. In the last year, almost 70% of arrests involved single people, most of whom were repeat offenders.

In September, agents reported a 19% incidence of recidivism. The average recidivism rate recorded by Customs and Border Protection agents between 2014 and 2019 was 14%.

Rep. Henry Cuellar (D-Texas), one of the most critical members of his party over Mr. Biden’s border policy, stated on Fox News on Sunday, in response to a question on immigration figures, that he has urged for improved measures to assist immigration issues. “The border is not secure,” and he stated we must ensure that there are consequences.

He added that he alerted Mr. Biden’s transition team in late 2020 that more individuals may attempt to enter the border illegally under his presidency and encouraged them to be prepared for a possible surge. At the border, we can be empathetic, but we must execute the law. He stated that this would happen if you didn’t return people.