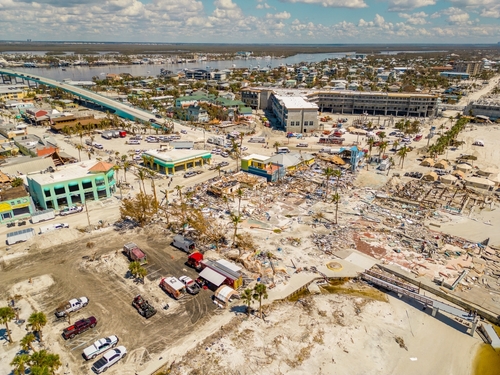 On October 5, President Joe Biden embarked on a trip to Florida, where he conducted a damage assessment of regions that had been impacted by Hurricane Ian and visited with Governor Ron DeSantis.

Along with First Lady Jill Biden, FEMA Administrator Deanne Criswell, and a slew of other aids such as Kate Bedingfield, President Biden headed to Florida.

Before meeting with DeSantis and other local, state, and federal officials at Fisherman’s Wharf, President Biden took a helicopter ride to get a bird’s-eye view of the area.

Biden told the press that DeSantis “had done a fantastic job” managing the aftermath of the hurricane. He said that the actions taken by the governor were very extraordinary.

We worked hand in hand, even though our political ideologies couldn’t be more opposite; nonetheless, we worked hand in hand. And when dealing with this issue, he’s been on top of everything, the President stated. Adding that they Had been moving in unison the entire time.

DeSantis acknowledged their presence and expressed gratitude for the help provided by the federal government.

DeSantis said they were very fortunate to have good coordination with the White House and FEMA from the very beginning of this. Biden swiftly approved a major disaster declaration, providing federal aid to individuals affected by the hurricane.

Furthermore, in addition to the monetary aid, tens of thousands of state and private workers are already present in the state to assist with the cleanup.

According to state and federal government officials, more than 3,800 people have been rescued, and about 100,000 structures have been searched for survivors. Additionally, pre-staged resources such as water have been deployed. Only 3% of the state is without electricity at this time.

Speaking to reporters aboard Air Force One, Criswell said the hurricane had caused “catastrophic” damage and that many residences were still submerged in water.

This spurred President Biden to announce that federal support for disaster relief would be available for sixty days to assist with the recovery. The governor put in a request for the allotted amount of time. It is anticipated that the cost would run into billions of dollars for the government.

Currently, there is only one job that we have, and that’s to ensure folks in Florida get everything they need to recover, added Biden.

According to what Biden mentioned, the coverage duration might be extended if DeSantis makes the request. Additionally, the President mentioned that he was trying to send extra troops to the state.

After visiting with local business owners and others whose lives were disrupted by Ian, President Biden and his wife were scheduled to return to Washington on Wednesday evening.